In February and March of 2009, Tanja’s Twelfth Floor toured to England, Scotland and Wales. The tour encompassed fourteen cities and included a season at Queen Elizabeth Hall, Southbank Centre, London, where the Tanja Liedtke Foundation hosted a post-performance reception for the many friends and colleagues who attended. The tour enjoyed full houses and received overwhelmingly enthusiastic critical response.

“It is fascinating dance theatre of immense power, mixing light and dark in quick-fire turns; compelling, funny, intense, peculiar and harrowing, all in the same breath”.
Graham Watts, February 2009, www.ballet.co.uk

Have a look at the tour website for extended trailers and some wonderful vox pop interviews after Twelfth Floor’s performance at the Warwick Arts Centre, Coventry.
www.twelfthfloortour.co.uk

In October 2009, Twelfth Floor was also presented in Berlin at RadialsystemV,  and in Stuttgart at Theaterhaus. 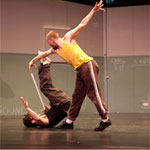 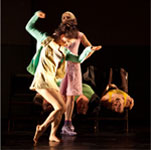 Have a look into the gallery